Special Places and Remarkable People: the Early Days of Globalization

Course Overview: The term ‘globalization’ dates from the 1980s. It usually refers to the exchange of ideas, culture, capital and goods, but a broader definition would include biological globalization, the spread of plants, animals and disease. Some suggest 1492 and the opening up of the Americas as an appropriate start date, but the history of globalization is much longer. For some, it begins with the first African diaspora that began about 1.5 million years ago. In this series I’ll focus on some examples of early globalization by looking at the contributions of various individuals and societies. The selection reflects my travels and how and where I’ve crossed paths with these people.

October 20: Life on the Fringes of the Emperor Hadrian’s Empire. - The Roman Empire was at its maximum extent when Hadrian succeeded Trajan as Emperor. Life on the fringes of that empire had many of the trappings of normality – impressive cities and fortifications, etc. – but was unpredictable. We look at life on the edges at Hadrian’s Wall in the UK, and at a number of other outposts in Morocco and Jordan.
October 27: Genghis Khan, the Yellow River, and the Loess Plateau. - This area in north central China became a battleground for the Han and Mongols. Genghis Khan made major inroads. His grandson, Kublai Khan, briefly occupied the whole of China. The region is being rapidly desertified. The yellowness of the river stems from the huge amounts of silt flushed into it as it crosses the Loess Plateau. Erosion creates spectacular landscapes and impoverishes agriculture.
November 3: Alexander von Humboldt, El Nino and the Rise and Fall of Pre-Columbian Societies in South and Central America. - November 3: Central and South America produced a series of spectacular and generally short-lived cultures. Some became victims of European exploitation, but most became increasingly susceptible to environmental calamity. The major culprit seems to have been El Nino, the Boy Child. In some places, repeated flooding seems to have been the major cause (e.g. the Nazca), but in central America, drought appears to have been the driver (e.g. Maya).
November 10: Expanding the Viking Realm. (1) Erik Thorvaldson (Eric the Red), Leif Erikson, Iceland and the North Atlantic. - November 10: During the tenth century, the Vikings expanded across the North Atlantic, through the Baltic and the Mediterranean into the Black Sea and the Caspian. Iceland was settled from 874 AD. The population was always small and subject to the threats of the Icelandic environment, particularly its volcanism. In 986, Erik the Red, exiled from Iceland, established a colony in Greenland. Why was life so difficult in Iceland? Why was the Greenland settlement doomed? They visited North America. Why didn’t they stay?
November 17: The Viking Realm. (2) Magnus Erlendsson. Viking Earls and Kings in the Highlands and Islands of Scotland. - In the late eighth century, early in the age of expansion, Vikings occupied the northern isles of Scotland (Shetland and Orkney), the Hebrides, the region around Dublin as well as eastern England. Their exploits in England are well-known. Their occupation of western Scotland is less obvious even though it lasted over 300 years longer.
November 24: Chasing Captain Cook; New Zealand. - November 24: There are over 100 monuments to this remarkable explorer, navigator and cartographer (including 9 in Canada). Many have been defaced or removed. James Cook (1728-1779) made three round the world voyages. His third was ended early with his death in Hawaii. In New Zealand, his main task was mapping the coast and assessing the suitability for settlement. What did he see? How different was his New Zealand to that of the present day?
December 1: Chasing Captain Cook; Murder and Mayhem in the Central Pacific. - On his third voyage, Cook explored the west coast of Canada and attempted to find the Northwest Passage. He revisited Tahiti and Moorea. He had with him William Bligh, later of the Mutiny on the Bounty infamy. The breadfruit story starts here. Cook was killed on Hawaii in 1779. What was Cook’s Hawaii like? Polynesians had been there for over a thousand years before his arrival. What impact had they had?
December 8: Darwin, Evolution and the Galapagos. - Like all oceanic islands, the Galapagos Islands have a peculiar suite of plants and animals. Endemic animals include flightless cormorants, marine iguanas and Darwin’s finches. Notable among plant endemics are prickly pears (Opuntia sp.) and tree daisies (Scalesia sp.). The islands were not discovered until 1535, and not settled until the early part of the nineteenth century. Darwin’s five week visit changed his life. Now, increasing tourism and the impact of introduced species has the potential to destroy what is still a largely pristine biota. 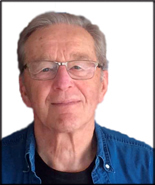 Dr Tony Davis  is an Emeritus Associate Professor in the Department of Geography, University of Toronto. Although his official appointment was as a biogeographer, he considers himself an environmental historian. His research focused on the reconstruction of past environments using pollen analysis, but teaching has always been his passion. Increasingly this has shifted to an emphasis on human-environment interactions in both his undergraduate teaching and in his presentations for life-long learning groups. His involvement with the latter started with Learning Unlimited in Etobicoke over three decades ago, but since his retirement has extended to the Later Life Learning group at Innis College, to Lifelong Learning Mississauga and to Third Age Learning groups in Guelph and in Burlington, where he now lives.