This course series explores the fascinating world of forensic anthropology and the detailed process of analyzing human remains. Alongside the fast-paced field of criminal investigations, we’ll look at the various tools and techniques that allow the human skeleton to reveal its complex layers of history, identity and culture.

January 10: Crime and Measurement - This evolving field of forensics has no difficulty keeping up with increasingly sophisticated crimes. Here we begin with an overview of the specialists tasked with criminal investigations, and the most up to date technology used to process an array of death scene and physical evidence.
January 17: Bones are Forever - Due to the durability of bone, it can be recovered in various conditions and still offer vital information. Find out how human remains are assessed, and the role of a forensic anthropologist in determining the sequence of events at a death scene.
January 24: The Time of Your Life - In determining the forensic significance of human remains, it is critical to establish the context of time. Were the remains deposited last week or a thousand years ago? Here we explore the many clues and procedures that define the context of a burial and the subsequent direction of all death investigations.
January 31: Indigenous Bodies Then - Indigenous remains and their associated grave goods were once considered hot commodities that commanded scholarship and hordes of museum visitors until a sudden arrest at the ROM. This lecture discusses what happened at the Royal Ontario Museum that led to dramatic changes in both the ethics and laws regarding archaeological practices and the rights of the Indigenous dead.
February 7: Indigenous Bodies Now - Now in the province of Saskatchewan a preliminary investigation by Cowessess First Nation led to the discovery of at least 750 unmarked graves near the former Marieval Indian Residential School. As a follow up to the previous lecture, we’ll explore the status of these graves along with the many others recently uncovered across the US and Canada.
February 14: Mortui Vivo Docent – The Dead Teach the Living – Part I - It is assumed that once a body has decomposed, an identification is no longer possible. But an individual’s biological identity is not altogether lost through skeletonization. Here we delve into the traits and characteristics on bone that reveal one’s life long after their death.
February 21: Mortui Vivo Docent – The Dead Teach the Living - Part II - A skull fracture that occurred years before death may not be pertinent to a homicide investigation. However, if the fracture occurred at, or around the time of death, it becomes crucial evidence. Learn how various forms of trauma are identified on bone along with a ‘behind the scenes’ look at some of the most high-profile homicide cases.
February 28: Let’s Face It - Facial reconstruction on a human skull is a controversial and complex process that combines knowledge of human anatomy with artistic ability. Though it was often used to recreate famous faces of the past it has since been applied to a number of cold cases. In this lecture, we uncover the method and the madness of facial reconstruction as well as those of several John and Jane Doe cases that have yet to be solved.
March 7: Trophies and Talismans - Part I - Law enforcement is often at odds with how to proceed when discovering human remains in private collections or displayed as art. Against the backdrop of plundered graves and private auctions, this two-part lecture is a journey into how and why the undisposed dead have become such emblematic features of contemporary culture.
March 14: Trophies and Talismans – Part II - It has been incorrectly asserted that the early Catholic Church forbid human dissection, however many of the Church’s practices of making relics from human body parts formed the basis of the first autopsies and anatomical treatises. This final lecture explores how a generation of Renaissance artists were inspired by human dissection and subsequently embedded symbols of this practice in their work. See art from a forensic anthropological perspective, as a secret dialogue is revealed between the human body, religion and an emerging science. 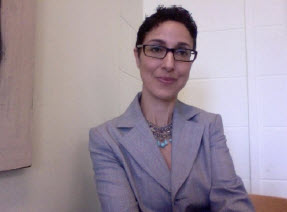 Dr. Myriam Nafte PhD. is a trained visual artist and skeletal Biologist with a long history of drawing and analyzing the human body - both living and dead. For well over 20 years, she has worked with law enforcement to investigate and identify human remains in a forensic context while honing her skills as an artist. She has a B.A. in Medical Anthropology from York, and an MA and PhD in Physical Anthropology from McMaster. In addition, she has studied anatomical drawing and sculpture and textiles.